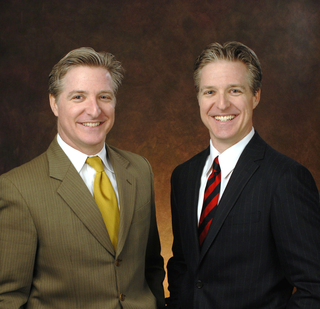 Jerry is the Executive Director of Communications for the CBS Television Network Sports Division’s Communications Department. Tom is the Vice President of Communications at Outdoor Sportsman Group (Outdoor Channel, Sportsman Channel, World Fishing Network, 15 magazines, 19 websites). He also founded Lions Roar Public Relations and was a television public relations executive with Turner Sports and NBC Sports and USA Network. Each has been working in some capacity in sports communications for more than two decades. They grew up in upstate Oswego, New York.

Among his career highlights, Tom has worked in Major League Baseball for the Boston Red Sox in various capacities in the organization, was the Director of Sports Information at Merrimack College in Andover, Massachusetts, and a managing editor at Professional Sports Publications in New York City before working at NBC/USA for more than five years. He has worked on events such as The Masters®, Ryder Cup, NBA Finals, PGA Tour, PGA Championship, U.S. Open Tennis Championships, French Open Tennis and 2004 Olympic Summer Games.

Among his career highlights, Jerry also has worked in Major League Baseball for the California Angels and Oakland Athletics organizations, as well as Major League Baseball International as the Director of Media Relations for the Australian Baseball League in Sydney, Australia. He has worked for CBS Sports on some of the biggest events in sports including the 1998 Olympic Winter Games in Nagano, Japan, Super Bowls XXXV, XXXVIII, XLI, XLIV, NCAA Championship and Final Four, as well as the U.S. Open Tennis Championships, The Masters® and PGA Championship.